Three Decades of Treatment for HIV

Imagine a house in the plains surrounded by a dust storm. The winds blow briefly, allowing some dust to enter through open windows and doors. At that point, one could reason that there is no need to shut the doors and windows—it won’t continue. But a gust returns and continues throughout the night, the next day, and for many months. Upon realization that the wind will not stop, windows and doors are shut, quickly, starting at the top floor. Soon, all the doors and windows are blocked, the initial momentum gone, but much is won in this battle—the rapid flow of sediment halts. The remaining time spent in the barricaded house is
used up by dusting and sweeping, praying for a day without wind. Some residual soil and pollen manage to seep into the homestead, through cracks and those moments, of either curiosity or complacency, where a window is opened, and the owner sticks his head out to see if the storm is continuing, half-believing that it will be okay. More particles enter the house.


We are at the 30 year mark of a storm like this: known human immunodeficiency virus (HIV) infection and the acquired immunodeficiency syndrome (AIDS). Although HIV was likely infecting people since the early 1930’s, its consequences weren’t realized until Pneumocystis jiroveci pneumonia infections caught the attention of the medical community in June of 1981. Pneumocystis jiroveci pneumonia (then referred to as Pneumocystis carinii pneumonia) was typically rare, but it, along with high use of pentamidine (distributed by the CDC at the time) and reports of other opportunistic infections signaled something was wrong. The collection of opportunistic infections lead to the definition of AIDS. Opportunistic infections are caused by microorganisms that don’t typically cause disease in healthy individuals, but take the opportunity of starting infections in people with debilitated immune systems. Reports of AIDS, the end-result of HIV infection, were the initial gust that got almost everyone’s attention.

This attention included fear, disbelief, irrationality, and a flurry of medical research. The storm raged on as HIV was identified as the causative agent of AIDS. The storm raged on as people of all beliefs, viewpoints and prejudices used real and imagined information for their own purposes. Children with HIV, either infected from contaminated blood supplies or from their mothers; hemophiliacs; gay men; and drug users were shunned by some, but helped by many. A storm of research lead to staging of HIV infection, based on CD4 cell counts. CD4 cells are a type of lymphocyte or immune cell that helps humans fend off particular infections.  They pay attention to what enters our bodies. HIV caught the attention of the established medical  and research community.

Discovery of the enzyme reverse transcriptase (Figure 1) lead to the development of early antiretrovirals such as zidovudine (referred to as AZT in early trials). After seven years of zidovudine, it was discovered that it decreased the incidence of perinatal (mother-to-child) transmission and decreased the incidence of HIV due to occupational exposure in healthcare workers. Guidelines for reduction of perinatal transmission and guidelines for post exposure prophylaxis for healthcare workers were developed in 1994 and 1996, respectively. Zidovudine remains an important medication for these purposes. Use of zidovudine and other early antiretrovirals decreased the incidence of AIDS, and therapies began to be given earlier in the course of HIV infection.

Initially, much higher doses of zidovudine than what is used today (if used at all) lead to significant side effects such as anemia and severe muscular fatigue (myopathy). Other nucleoside reverse transcriptase inhibitors were developed in the 1990’s. Doses of available agents were adjusted according to side effects. Newer dosage forms were developed to improve absorption and effectiveness. This first decade in HIV/AIDS is likened to the closing of the second floor windows on the dust-surrounded house, and the medications pertaining to this era (first decade) are written in red in Table 1. 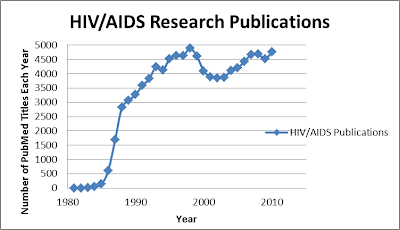 The second decade of antiretroviral therapy for HIV (1995-2004) was the most prolific. Newer nucleosides and combinations of them were approved (Table 1). HIV was treated more effectively with non-nucleoside reverse transcriptase inhibitors and protease inhibitors (and in combination). These agents became the anchors of highly effective therapy. HAART, highly active antiretroviral therapy, was born, and news of clinical trials with these more active medication regimens parallels the shut-tight house, more protected from debris. The medications approved during this time are written in green in Table 1.

Patients receiving HAART made miraculous comebacks from AIDS and near-death to relatively-controlled HIV infections. Viral load and resistance testing were also being studied; scientists and clinicians needed to know how they could be used to direct therapy. Patients with HIV were becoming relatively healthy and living longer lives than they had been during the earlier years of known HIV infection. They had fewer opportunistic infections. Clinicians started to worry about long-term issues such as side effects of newer medications (i.e, lipodystrophy), resistance to long-term therapy, and cardiac health in their going-to-be-aged HIV patients.

The present, and third decade of antiretroviral therapy for HIV contains optimism as people with HIV live near-normal life expectancies, but there must be caution. Treatment of people with HIV remains complicated, and should be done by clinicians who have a lot of experience with treating HIV. Detailed guidelines are available to aid therapy. Resistant infections are becoming more common. Complacency is setting in—people are being less careful, and new HIV infections result.

The amount of new medications developed has slowed down as has the number of publications produced each year (Figure 2). There is currently no vaccine. That said, therapies are now smarter. Combination medications (Table 2) have decreased pill burden. Because of this, adherence to drug regimens is improved, leading to greater effectiveness and less resistance. Measurement of viral load and resistance testing are invaluable in guiding therapy. Other assays to minimize side effects and tailor therapy are also available.

Like the vulnerable house on the plains, when HIV/AIDS was first discovered, there was disbelief at first, then rapid movement in all directions to decrease the storm. Once researchers grasped the cause and gained knowledge of how to attack HIV, we began to see a slower spread of infection. We began to gain some ground on HIV with potent medicines. But the storm goes on, in the US and abroad, with individual challenges for countries and their people. Much progress has been made, but over 60 million people world-wide have become infected with HIV and more than half of them have died. We must work hard, continually sweeping and dusting, and never open the windows again—as long as HIV remains.