Melanie Stegman, Ph.D., Creative Director of Immune Defense (a novel video game) and Owner of Molecular Jig Games is the winner of this year's Inflammatory Language Contest. In her words...

The game is meant to be an introduction, a tool to spark interest and provide basic vocabulary so that players can follow up on Wikipedia or PubMedCentral, or also, so that a teacher could design a lesson based on the game as an introduction.

To play the game people can do it two ways:

1. Play on the web.  This requires a browser and the Unity Plugin for the browser, then a link to the html.
Link to the Plugin :
http://www.Unity3d.com/webplayer
Link to the game:
https://s3.amazonaws.com/immunedefense-web-builds/new+folder/Mar12/IDWebBuild031215Stream.html

2.  Download and play on your Mac, PC or Linux.  (no tablet version yet).
https://www.dropbox.com/sh/it83n3y9kinzeja/AABHqbZ8C6XSBkfLI8uK-mRxa?dl=0

Some browsers will assume any download from dropbox is suspicious.  It is not, Immune Defense has been downloaded and installed countless times, there are no viruses.

Video games make players interested in accomplishing a goal.  Players expect to be given tools to accomplish the goals.  Players also expect to be able to try the tools and see what happens.  The game needs a limit, an end, a loose state for each level. In Immune Defense, the accumulation of too much inflammation damage is the end. This means the player will consider each of their actions in light of whether or not the action will increase or decrease the rate of inflammation damage. Players will learn that inflammation is caused by many sources, has a wide variety of effects, is useful for killing pathogens, and also causes collateral damage.

Immune Defense is an interface that can introduce non-scientists to the molecular aspect of cell biology.  Once we have introduced these basic concepts  about inflammation, we can introduce more detail using the familiar interface.  Adding more detail is the same as making more levels of game play.  The very most unique thing about Immune Defense is that we are able to use the actual molecular mechanisms of inflammation in the explanation for what it is.  We are able to use molecular level explanations because Immune Defense is an interface that lets player see and manipulate molecules and cells.  The time we spent creating this interface, choosing which details to show, which details to allow the player to manipulate, which details to require them to master… this design allows us to drive interest to molecular biology in an unprecedented way. 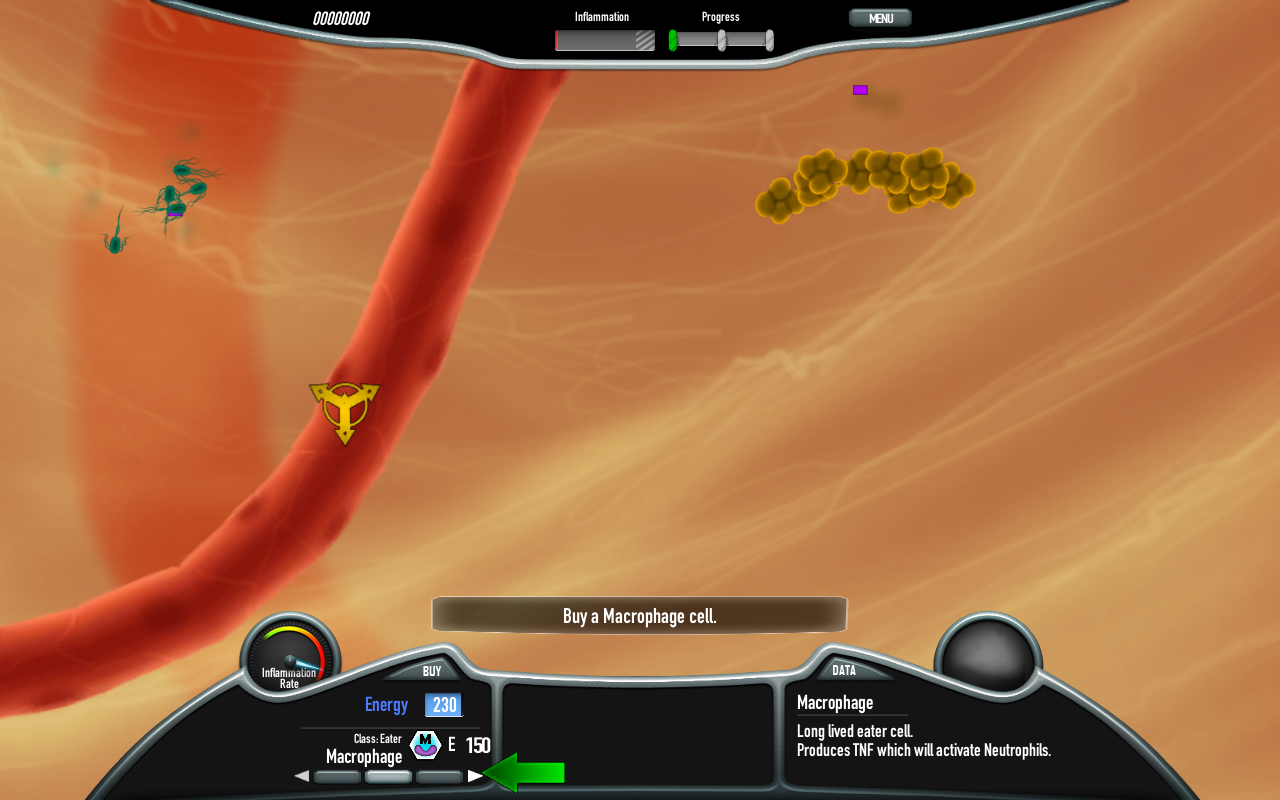 The player pilots a 25-micrometer Microbot inside the body. The Microbot gives the player advice about which cells to buy and how to use them.  The Microbot uses “energy” to call up white blood cells.

Players can change the receptors on their cells. Adding a “MOVE” receptor, allows cell to respond to certain cytokines. In this case, purple rectangles represent Complement Factor C3a and following them will bring a cell closer to the bacteria. 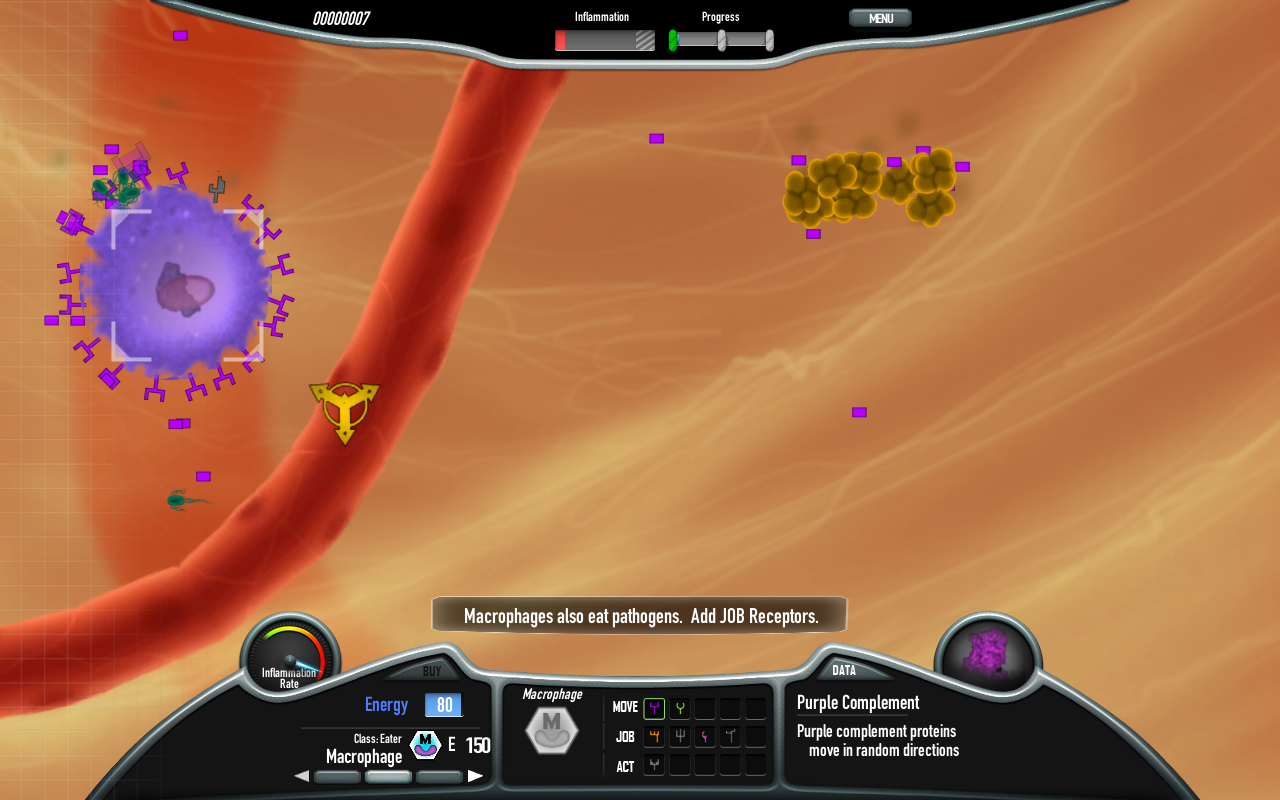 With JOB receptors, cells can perform various functions, and the function of an “Eater Cell” like Macrophages, is to eat.  Phagocytes have several receptors for binding to pathogens. Here, we are using the “LPS Receptor” (TLR4). E coli bacteria are bound to the receptor and are being “eaten” one at a time.

After the four steps of killing a pathogen are clear to the player, we introduce pathogens than can evade the four steps.  Each pathogen is a puzzle to be figured out.  This increasing level of complexity draws the player in.  By balancing the engagement of the game play, the clarity of the molecular and cellular events and the amount of information presented to the player, we are able to teach very complex and abstract concepts.  For instance, we balance the level of information presented by only showing the parts of the cell that the player needs to see to understand and manipulate the 4 basic steps of pathogen killing.

Tracking, binding, containing, dissolving are the steps to killing a pathogen. Interior of cells contains just the organelles required to demonstrate all the steps required to kill a pathogen. See the green E. coli bacteria inside the round endosome, which is moving toward the kidney bean shaped phagosome. 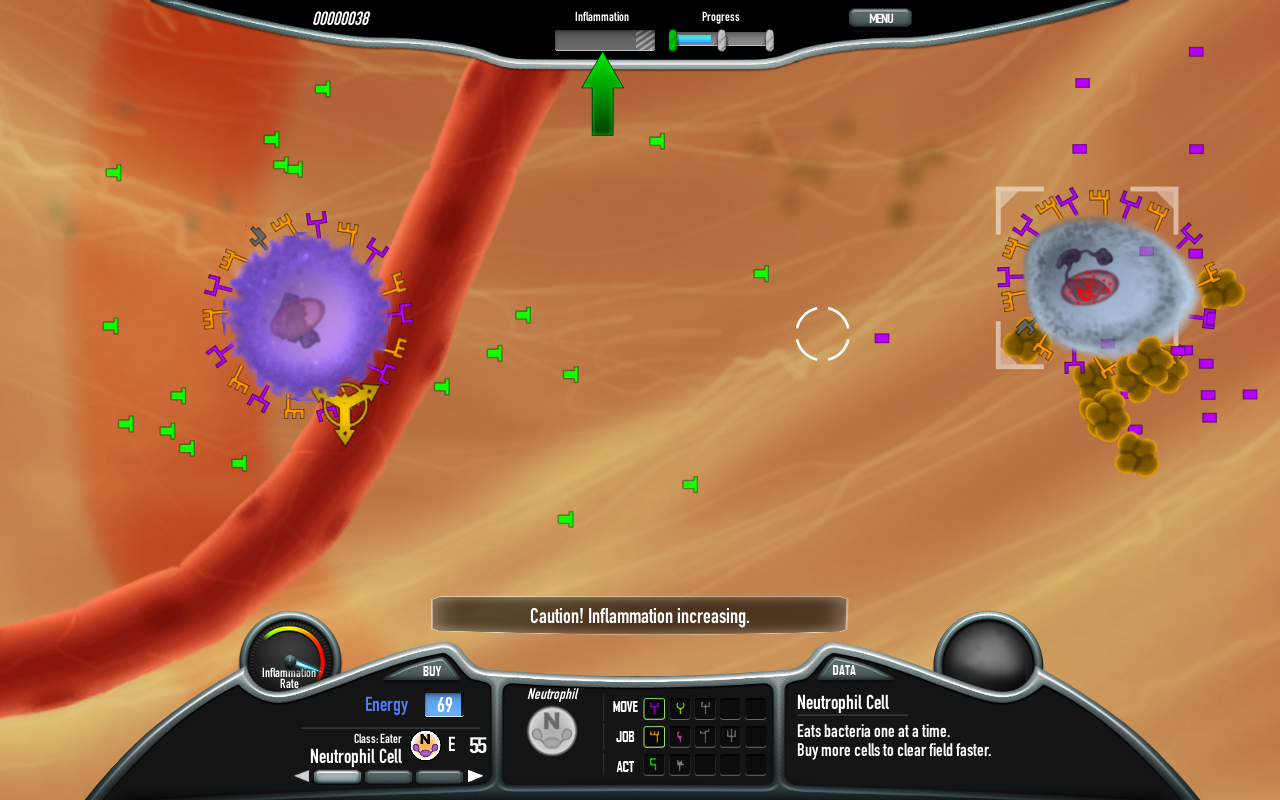 There are visual signals to indicate to the player that each step is taking place.  To indicate dissolving, red dots appear in the phagosome.  The red dots, therefore, become associated with killing pathogens.  These dots are the indication to the player that the final stage of killing a pathogen is occurring as expected. 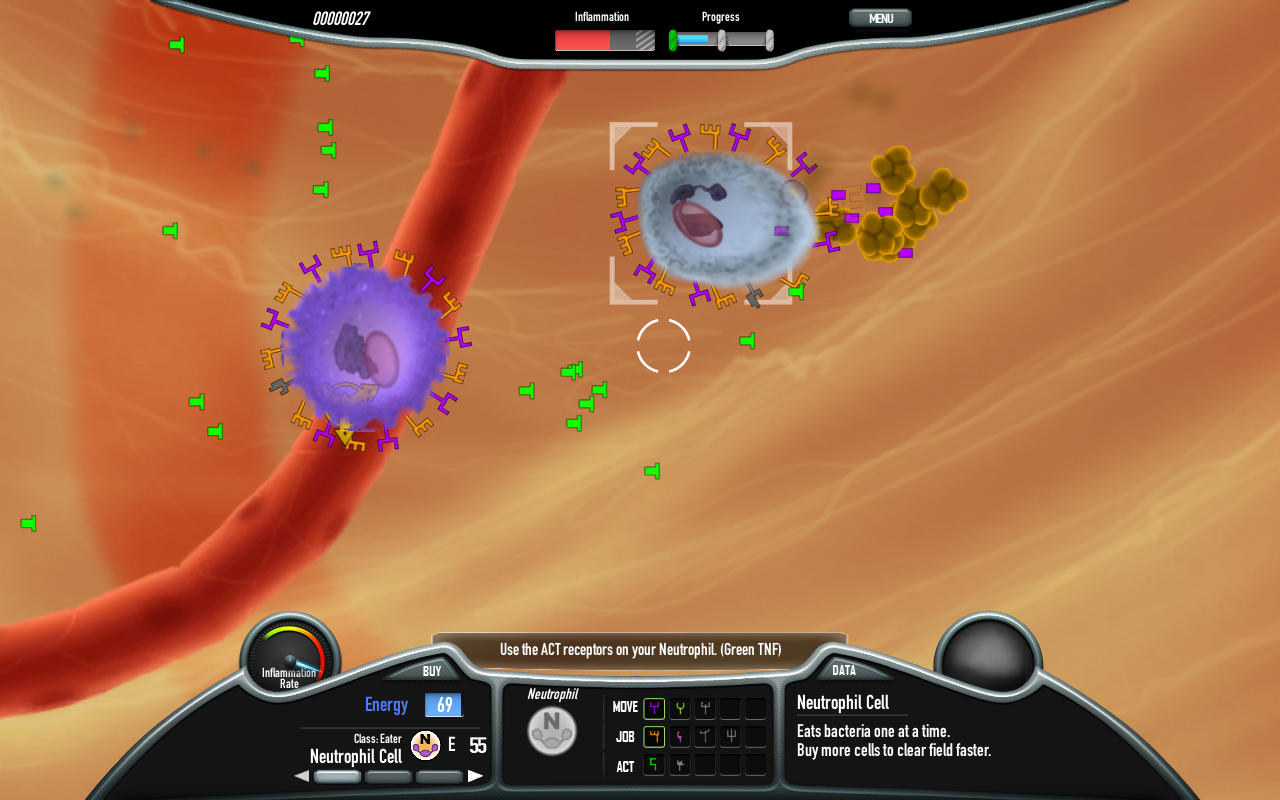 We teach players how to use Macrophage cells to activate Neutrophil cells, and then explain to players that activation both kills pathogens faster and also increases the inflammation rate.
Neutrophils are cheaper, and they can be activated by the TNF That Macrophages are making. Activated Neutrophils can eat many bacteria at a time, instead of one at a time.
Player must put the TNF receptor on the Neutrophil and drag a TNF to the receptor or wait for random diffusion to bring TNF to its receptor, as shown in the GIF below.  (if you cannot see this GIF, please find it here:
www.molecularjig.com/wp-content/uploads/2015/02/Small-Activated-Awesome.gif). 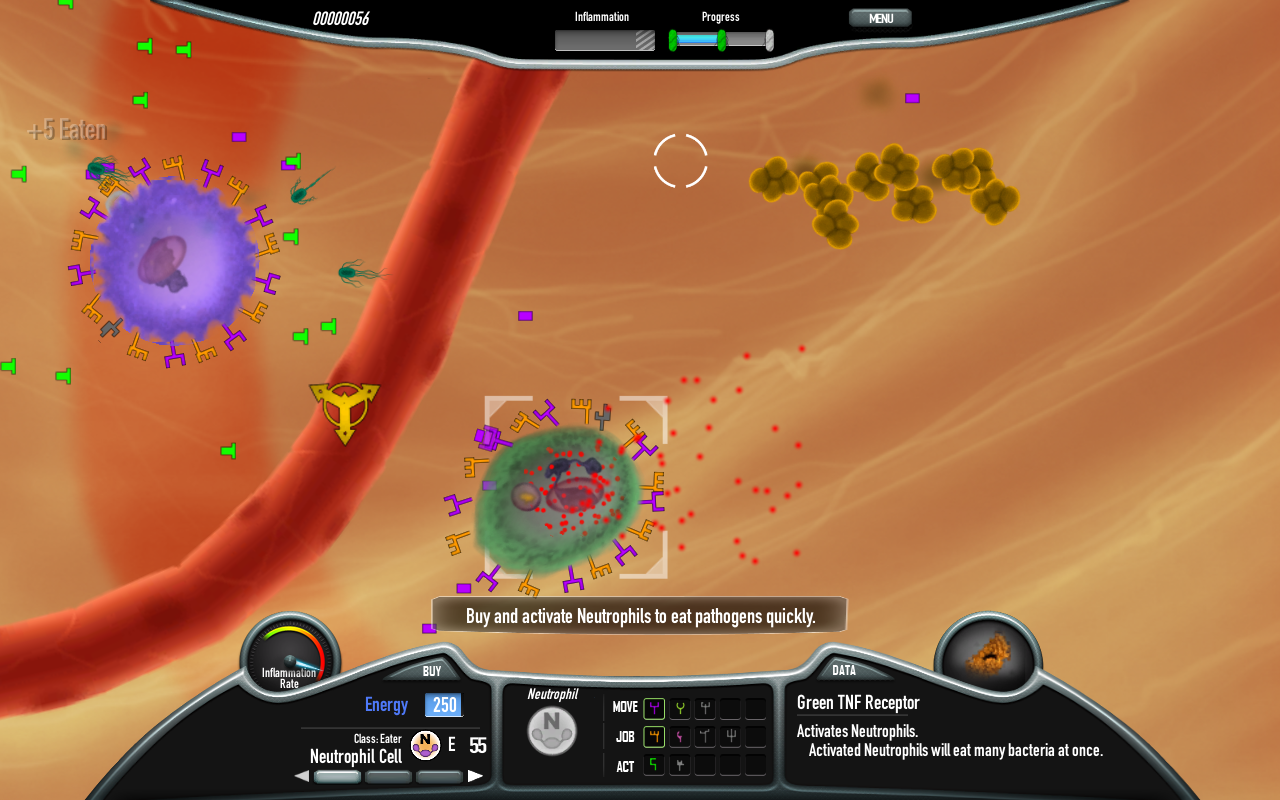 Once a Neutrophil is activated, the red dots are seen floating out of the Neutrophil, and the “inflammation rate” is increased.  This is the indication to the player that the Neutrophil is not only killing the pathogen, but that it is also causing general damage to the area.

Additionally, Neutrophils accumulate red dots in their cytosol, which indicates damage to themselves, and after dissolving 13 pathogens, the Neutrophil become apoptotic. 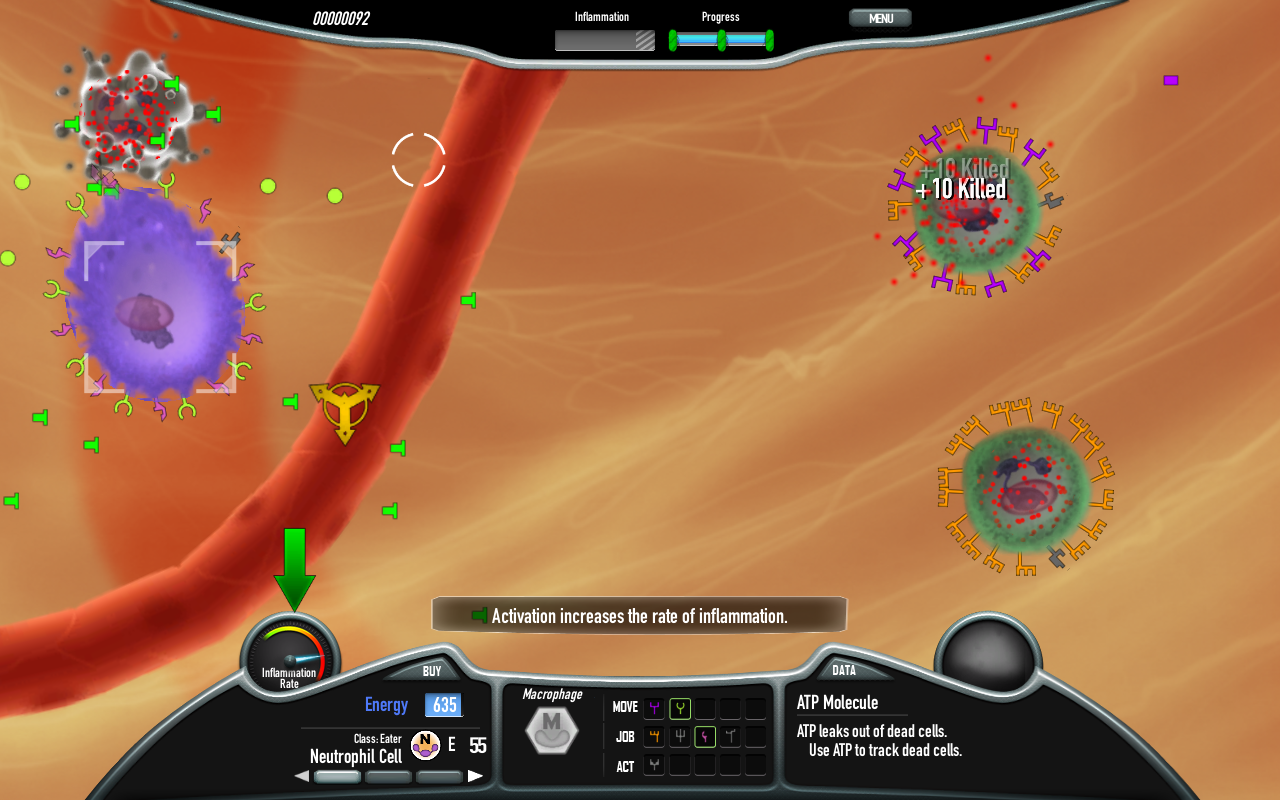 In the game now, the total damage caused by inflammation is indicated by the red bar at the top of the screen.  When the red bar is all the way filled up, the level is over because too much damage has occurred. 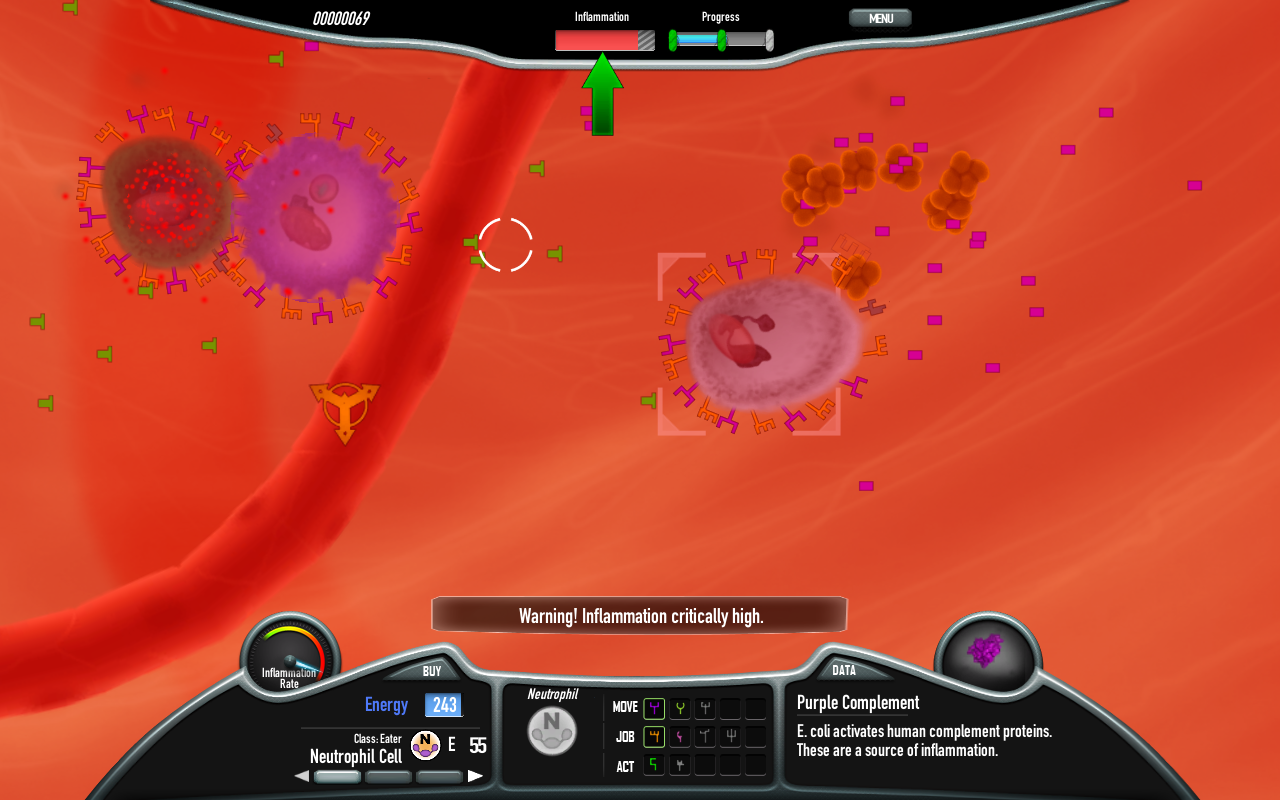 Here the total inflammation damage has reached 80% of max allowed damage, and the screen in blinking red to indicate the critical condition.  The player can still recover, by eliminating pathogens, which reduces the C3a. Additionally, Neutrophils in our game die after eating 13 pathogens.  In later levels the player will be given molecules to let them lower the inflammation rate more quickly, such as molecules that inactivate their cells, cause apoptosis, or promote healing of the tissues.

Immune Defense was imagined and developed by Melanie Stegman and many others, who are listed at www.MolecularJig.com/Immune-Defense-Game.

Immune Defense has a trailer!